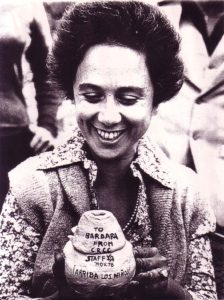 These parents wanted a friendly place where their youngsters could meet and learn together, despite the racial tensions followings the assassination of Dr. Martin Luther King, Jr. The parents involved in this project succeeded in making the Center a model of quality pre-school education, where the families, teaching staff and children had something to contribute.

The BCCC was originally located at the Calvary Methodist Church on Columbia Road, moving to its present location at 1470 Irving St. in the summer of 1973.

Barbara Chambers was the founder of the Columbia Road Children’s Center. After her passing in 1982, the Center’s name was changed to pay tribute to her work and dedication to children and families in the community.

The 1980s were a time of change at BCCC. Due to civil wars raging in Central America - punctuated by the assassination of Archbishop Romero, the DC region saw a significant influx of refugees from El Salvador, Nicaragua, Honduras and Guatemala. Most of the newcomers established themselves in the Adams Morgan, Mount Pleasant, and Columbia Heights neighborhoods - over the years, these new immigrants changed the demographics of the neighborhood and consequently the face of the Center. Today, Barbara Chambers serves a majority of Hispanic children and their families.

As demand for childcare and early childhood education increased, BCCC took the strategic decision to increase capacity by opening four new centers: BCCC #2 opened in 2014 in the Shaw neighborhood, BCCC #3 opened in 2016 in the upper Columbia Heights neighborhood, BCCC #4 opened in Mount Pleasant in April 2022, and BCCC#5 opened in Shaw  in march 2022. In all, the five centers serve over 430 children in the infant, toddler, Pre-K, and school age Before and After programs.
Constructed with ❤️by the BCCC Parent Teacher Organization